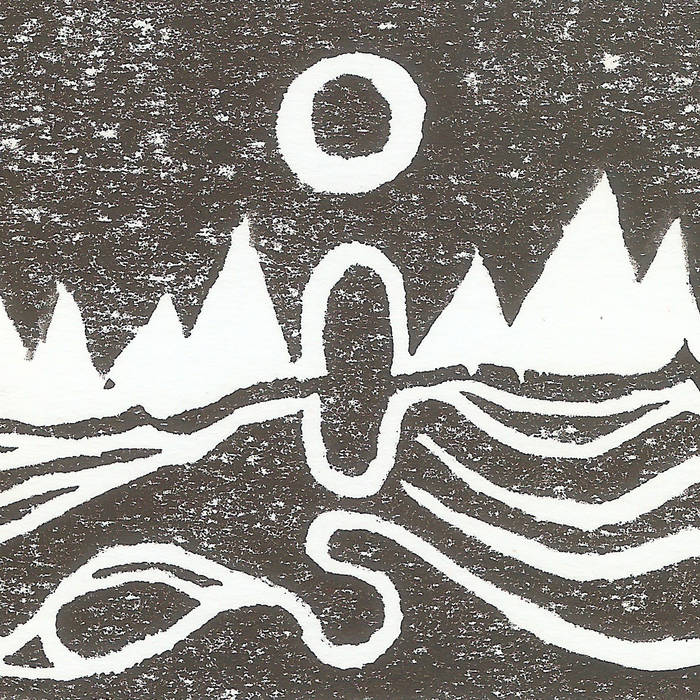 Housed in an icy seascape lino-print, the second Onus release, ‘Survival Burden’ opens with the expansive, oceanic basslines and crashing drums of ‘Urchins’ and ‘Ensimismada’ –with knotty narratives about slums, tsunamis and frozen time, rising up beyond the edges like freak cephalopods from the melodic waves and dissonant undertow. Then we have the claustrophobic space-rock of ‘Headguest’ before side A closes with ‘Schrine’; where a mesmeric build-up of dense arpeggios powers a chant on the arbitrariness of identity.

Side B takes us back out to sea with ‘Macey’s Letter’, with a sweet melodic motif engulfed in cascading bass and staggered drum patterns as words about ships, nations adrift and floating coffins are wrung out of the wash. ‘Colt Running’ is a tremolo-twang pop tune about equine abattoirs and ‘Emil’ –a cold-war dirge about skeletons in ashen forests. ‘Nerve Clinic’ ends the set, gleaning odd pearls from a gone-to-seed farmer, housed in a criss-cross glasshouse frame of gleaming bass and cymbal ricochet.

Welsh tape-slinging sorcerers, SIVILISED, have lined us up with a really great pair of tapes to get lost in, and I humbly suggest enjoying them back to back as I have for the past week or so!

Onus’s “Survival Burden” starts out with the mood of some wizard captain’s hazy tale of sailing seas of fog and seductive miasma-burned-aura, his declarations weaving violently back and forth between manic and stoic, the baritone guitar work and bass lines independently choking the atmosphere further, the ritualistic percussive mantras flirting with overwhelming fervor; make no mistake, Onus know how to kick out some seriously thick grooves and still keep on an ambient tip, still urge the mind to wander a thousand distant shores while still being spellbound by their tidal pull.

Enter into this equation Atlantikwall’s “Anura”, a palpably sweat-palmed conjuring pose, a blitzkrieg of alarm clock persistence, bleating disembodied organisms half-orgasming in electrically syncopated throes of bliss and confusion. Between these two bands, a spirit-DNA is shared around post-punk aesthetic, the desire to maul your mind into submission (one through enchantment, the other with melodic estrangement), and just outright being reminded how goddamn good the 90s were for East Coast/Midwestern (USA) indie bands like June of 44, Lungfish, & any number of Louisville visionaries!

These two cassettes come in sexy O-Cards with understated printing and are Well Worth the effort to listen to on a repeated cycle for many a day. Headphones or not, separate or together, they’re a series of R-E-A-L trips!