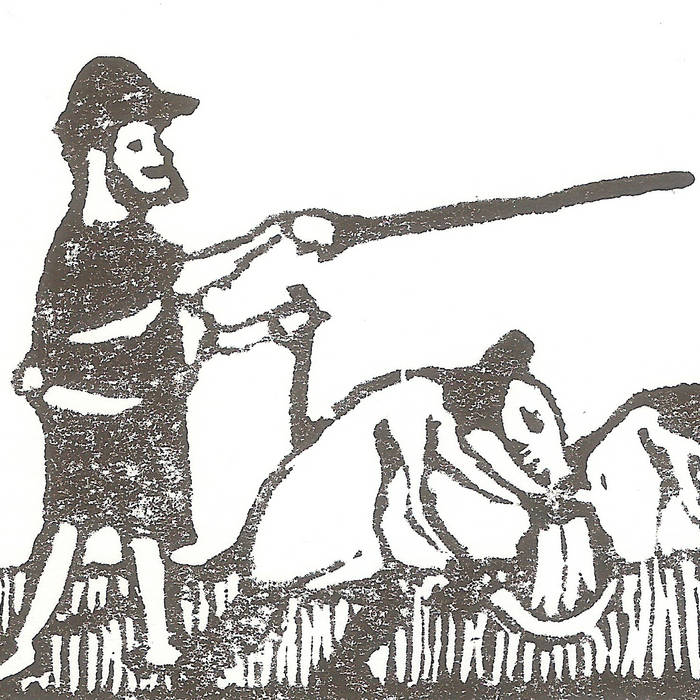 The music is dark-toned and downbeat; with descending arpeggios and sparse cyclical riffs a-plenty, interlocking with skeletal drums to provide lean bones for nebulous melodies and scuffed harmonies to take hold.

Lyrically, the album opens up snapshots of rewilded outskirts, ritual humiliation, generational rifts and dispossessions; mining deep veins of residual cultural memory vivid enough to feel like premonitions. Lighter relief is to be had with more abstract grapplings with mapping the unknowable and framing a response to divine silence.

Limited to a measly 50 cassettes with lino-print sleeves, each including a download code.

I’d be a real lying son-of-a-beast here if I said that Onus’s “Ratsickles” was a “must hear” for the general rock populace. Whilst melodically SOLID, they’re probably too stoic in their presentation to command the average, passing listener’s attention. Their powerhouse is in a concertedly shamanistic patience, their lock-step-rhythmic chanting, a sincere, open-ear’d ceremonial bliss. I won’t even talk about the stop-on-a-dime timing!

When it comes down to it, Onus are an undeniably Serious. Itch. Scratcher. This three piece is an outright Drool-Worthy outfit to watch out for, especially for all lovers of Lungfish’s ritualistic grooves, Seam’s lush indie-guitar wizardry of the flat-pick’d riff, and, OH!!! that fucking brilliant mid-low tone from Sonic Youth’s most (imnho) tonally beatific masterpiece “Murray Street”! No, it’s not made for everyone, but (made for) quantity ain’t (made for) quality, either, now is it?!

Comprised of drums, bass, and baritone guitar, each instrument carries its own rock-solid, independent weight whilst a slew of layered, disciplined baritone vocals drag our minds into and out of lock-step, angular grooves, replacing them (and us) within/out abstract lyrical positions. Strum-free, the (baritone) guitar lines are occasionally looped over and accented with timbre’ly -potent pedal’d-textures…and I really hope I get to see these folx play the west coast sometime soon, to see if they use a loop pedal and THEN explore overtop it, live, or do they just hire another touring musician? Do they all sing at the same time, or is it just one singer’s multiple takes in the recording? Or is it all just one person creating these rhythmic mantras in their garage studio? I’d love to hear the outtakes and demos, too!

When you’re sick of party melodies and want some lyrical jams to seaweed sway to, give this half-hour palette-wetter a few repeats and you’ll probably fall in love like I did. More please!

Am I good at my job? No. I was supposed to cover this extremely beautiful tape a few weeks ago and totally forgot. I’ve said it before and I’ll say it again: fire me. In my place, start a band and hire someone from Onus. Get them to write songs for you. This tape for usually pretty leftfield Sivilised is a lilting, twanging, forward-momentum indie record that distills everything I love about lo-fi, and in particular, one thing: its ability to make disaffection the most moving thing you could ever feel.

“Cinnabar” opens this record like an old-school slowcore tune you might irresponsibly put on/receive on a tape for/from your crush -- it’s the least romantic thing ever but its gorgeous guitar line sounds fraught with emotion, matched with a vocal line that only cares about moving forward through it all. It moves into “Parnassus”, guided by a grumbling bass line and a muttered, whispered and snarked vocal line that could get Bedhead a few centimetres glummer. On this tune, Onus really locks in, circling the drain of their riffs for seven minutes without hoping for a resolution -- they eventually invoke chaos as the guitars start to tremble off at the edges and their singers start to wear themselves out from all the mingling.

These sparse tunes of baritone emotions will appeal to pretty much anyone schooled in sadcore, and they’ll grab that crew too: there’s something about the way Onus write these songs to sound both stuck and pacey at the same time, moving between slow-burning and active as if they’re the same thing. Really lovely greyscale pop hits.