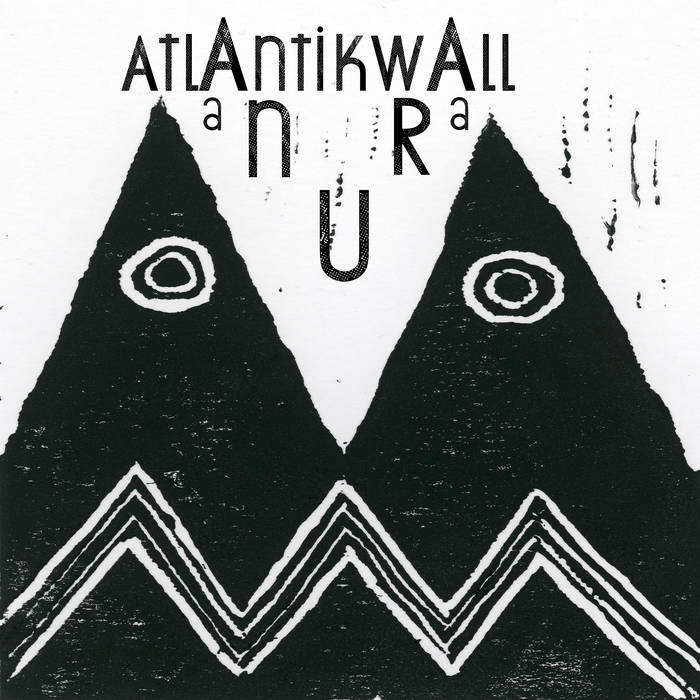 Reeling out of the zeitgeist, the second album from Atlantikwall presents an (un)timely reminder of the ruinous folly of fortified borders –ever destined to regress into the deformed remnants of ideological excess.

The album revels in layers of animalistic, braying, frog-calling guitars that form lurching texture puzzles that stagger and collapse around cyclical-shift drum patterns and primitivist grooves. These foundations harbour fragmented vocal chants, congealing into elongated songs that address themes of last-ditch reproduction in the face of impending extinction; resource wars fought by farmers in lands encroached by desertification; reinstatement of human sacrifice as response to environmental catastrophe; lone refugee journeys and modern-day wall-building as psychic splitting.

Based as it is on Ynys Môn (aka the Welsh island of Anglesey), Sivilised Recordings continues to sound like it’s rather channeling music from another goddamn galaxy. The fifth tape on the imprint is the second by Atlantikwall – one of this column’s favourite tapes way back in 2016 – and the unnamed musician(s) under the guise do exceed expectations with a cosmic slop of tribal psych-noise invocations. The core ingredients of a battered drum circle of endlessly looping percussive bashes, furry guitars, and general pedal scuzz remain thoroughly intact. The vocals however, are put into firmer focus. They’re brought forward in the mix and (somewhat) unmuddied, the stories being told inside these tracks also pulling into focus. They tell doomy tales of "reproduction in the face of impending extinction" or "resource wars fought by farmers in lands encroached by desertification". Third track, ‘Bone Shoots’ event seems to suggest reinstating human sacrifice to try and get the environment back on-side. (This is not endorsed by this column, might I add. Not yet anyway.)

These trippy DIY acid noise rock rituals loop and drone and batter away with intent, pushed into long jams of desperate wailing and gloopy fuzzed out mulch – nonetheless very fun too still. The Master Musicians Of Dyffryn Moor is a similarly anonymous and rural outfit, battering drums against the apocalypse, and located some 100 miles down the Welsh coast in Pembrokeshire. Both Atlantikwall and TMMODM seem to embody a hopefully infectious and very much near-magic (and very Welsh, even when sung in English) approach to music-making. For all its heaviosity and apocalyptic imagery, Atlantikwall’s boundless psychedelic tribalism feels a rugged musical theatre of hope.

Welsh tape-slinging sorcerers, SIVILISED, have lined us up with a really great pair of tapes to get lost in, and I humbly suggest enjoying them back to back as I have for the past week or so!

Onus’s “Survival Burden” starts out with the mood of some wizard captain’s hazy tale of sailing seas of fog and seductive miasma-burned-aura, his declarations weaving violently back and forth between manic and stoic, the baritone guitar work and bass lines independently choking the atmosphere further, the ritualistic percussive mantras flirting with overwhelming fervor; make no mistake, Onus know how to kick out some seriously thick grooves and still keep on an ambient tip, still urge the mind to wander a thousand distant shores while still being spellbound by their tidal pull.

Enter into this equation Atlantikwall’s “Anura”, a palpably sweat-palmed conjuring pose, a blitzkrieg of alarm clock persistence, bleating disembodied organisms half-orgasming in electrically syncopated throes of bliss and confusion. Between these two bands, a spirit-DNA is shared around post-punk aesthetic, the desire to maul your mind into submission (one through enchantment, the other with melodic estrangement), and just outright being reminded how goddamn good the 90s were for East Coast/Midwestern (USA) indie bands like June of 44, Lungfish, & any number of Louisville visionaries!

These two cassettes come in sexy O-Cards with understated printing and are Well Worth the effort to listen to on a repeated cycle for many a day. Headphones or not, separate or together, they’re a series of R-E-A-L trips!