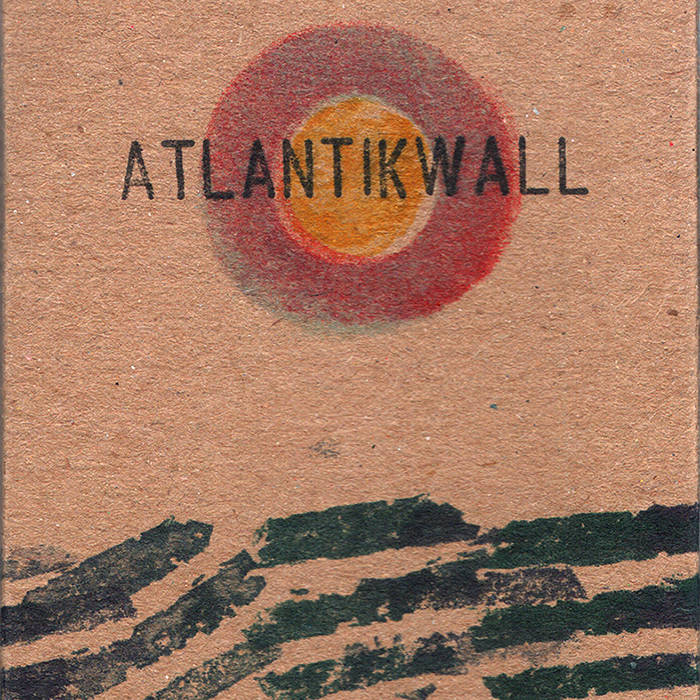 Like the weird zoomorphic concrete bunkers crouched along the North European littoral from which the name is lifted, Atlantikwall tracks are looming, colossal structures, moulded out of guitar density overload, atavistic rhythms and cyclical chants.

A tape of two halves: one side vocal the other instrumental, with songs constructed on a bedrock of overlapping loops and ritualistic drums; the gradual heave of tectonic phase shifts opening up strange fissures of churning organic textures. On top of these foundations we find the stroboscopic buzzsawing guitars of ‘Constellation’, interlocking arpeggios subsumed into billowing tonal smears in ‘Passage Colours’, ‘Downriver’s unmoored feedback snaking through alien fx fauna and the psychedelic afrobeatesque noise workout of ‘Duneskin’ juggernauting into the sun.

Out via a new tape label based on the island of Anglesey (or Ynys Môn) called Sivilised, this self-titled collection of long form lo-fi tribalism is anything but. It’s the sort of record you’d find halfway down the rabbit hole of the Nurse With Wound list, seemingly impossible to attribute to a mortal from this dimension. A bedrock of looped simplistic drum figures and confused guitarscapes battle it out with all manner of overlapping gloop and - on the first side of the tape - half-murmured chant-like vocals. The artist has clearly overlapped way too many takes, but it has the effect of adding weight to the five colossal tracks on offer (rather than burying their key elements in a confused haze). ‘Rebuild The City Lies’ opens with a kind of confused song of relatively complicated multitracked singing somewhere between King Sunny Ade and Mark E Smith. To clarify, this is no lo-fi, outsider project. The artist behind Atlantikwall is an intensely clever arranger, and each of the 10-minute plus tracks builds and shifts with a keenly thought out logic, occasionally parting the sea of criss-crossing textures and chanting for a perfectly placed guitarpeggio.

Side two’s instrumentals are arguably more focused, and somewhat less weirdly joyful. ‘Downriver’ spends 12-minutes slowly marching drums, feedback, and piercing synth tones, sounding like Jad & David Fair covering Teeth Of Lions Rule The Divine in their bedroom, and winding up as engrossing as a La Monte Young outing. ‘Duneskin’ closes the album with 20 minutes of higher energy beats that slowly grow and shift behind a barely changing set of repetitive guitar fuzz and gloopy keyboard mud. The billowing shards of amplifier noise and psychedelic sounds ride the funkified drumming deep over the horizon, to extremes $hit & $hine would proudly put their name on, and it’s an immense experience to follow it all the way. Five tracks of epic sprawling repetitive lo-fi percussive gloop you can nod your head to? I may have found my favourite cassette tape ever.

I was listening to this whilst doing something completely different and for some reason got it into my head that it was Death in Vegas. "This new Death in Vegas" LP is really super" I thought. The entire first half of the first side of the tape is taken over with a ten minute track called 'Constellation' which I can't really explain using words. It's brilliant, it sounds like a big jumble of Sun Ra, Throbbing Gristle, Moondog and Animal Collective. This is true cosmic music with an endless barrage of vocals which splurge over a squelshy bedrock of electronics and afro-beat drums.

Despite sounding completely different, 'Passage Colours' is just as great. It starts gently with watery Sonic Youth styled guitars nestling alongside concrete drones but then in come vocals leading to the sort of thing you'd imagine Fat White Family would sound like if you had never listened to them and just read press blurb.

Elsewhere we get a kind of stumbling Thinking Fellers style sonic slop before the tape finishes off with two instrumental tracks, the first of which is a droning instrumental piece which leads to the closer 'Duneskin' which has flanging disorientating effects which kind of remind me of Can 'Future Days' being reworked by Factory Floor.

It's interesting stuff this, the vocal tracks are particularly effective and if you think that the likes of Goat and Animal Collective are not as far out there than you might wish these days then you need to check this out. Lots of music too, so much music.